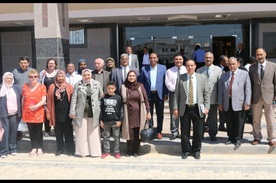 University President Prof. Ahmed Ghallab added that one of the most important international projects is the project of preparing refugees and immigrants’ teachers, which works to prepare male and female teachers who deal with children of immigrants, refugees, which is considered the first in the world in terms of idea, topic, and humanity. And how to apply correct and scientific methods to teach them and get them out of what they suffer from harsh psychological conditions as a result of the circumstances that they and their families went through and that by presenting the curriculum and the content that developed by specialized university professors from eight Egyptian, British, Greek and Cypriot universities, including Aswan University.

Aswan university president Prof. Ahmed Ghallab added that he hopes that this experience to be generalized later in the universities worldwide due to the importance of this project in upgrading future generations and not leaving subject to deviation, extremism, and hunting by stalkers. The workshop will be attended by representatives of Frederick University in Cyprus and the University of Crete in Athens_ Greece, via video conference, and from Egypt, universities of Heliopolis, October 6, Al-Azhar, Zagazig, SEKEM Development Foundation, a representative of the Syrian community and the Elijah institute.

Prof. Nadi Kamal Aziz_ project manager at Aswan University_ stated that the workshop aims to review professional diploma courses of preparation of refugees and immigrants’ teachers and that through the results of experimentation of the courses of that diploma in Faculties of Education in the above participating universities.

Aswan University and other universities presented the lessons learned from experimentation, as well as equipping the computer lab in each faculty of education through computers, an integrated video conference unit, and other devices. As well as the role of each university in advertising the project in different ways, preparing for the accreditation of this diploma from the educational studies sector of Supreme Council of Egyptian Universities, preparing to apply it to a group of Syrian, Egyptian, and other teachers.