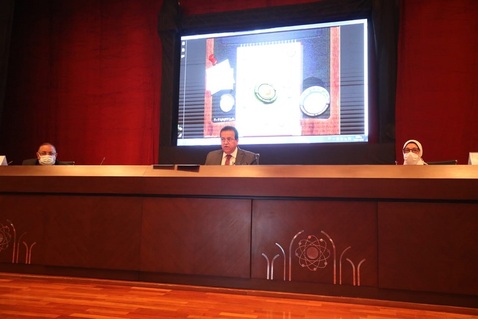 In the afternoon, on Sunday, The Supreme Universities Council held its periodic meeting headed by Dr. Khaled Abdel Ghaffar Minister of Higher Education and Scientific Research in the presence of the members of the council at Helwan University Campus. The council thanked Helwan University headed by Dr. Majed Najm-University President for its hosting for The Supreme Council of Universities meeting. The council held a minute of silence in honor of the merciful soul of Dr. Sabri Al-Senussi-Dean of the Faculty of Law -Cairo University and Legal Adviser of the Supreme Universities Council asking Allah to bless his mercy and forgiveness.

The Supreme Council of Universities valued his Excellency President Abdel Fattah Al Sisi-President of the Republic and all relevant institutions in Egypt for their historical role in stopping aggression on the Palestinian people confirming the historical role of the Egyptian people in supporting the Palestinian cause. The council announced presented all aspects of education and research supporting for the Palestinian side, presents all facilities and support for Palestinian students who study in Egyptian Universities, the council decided to exempt Palestinian students who are delegated from Gaza to study in the Egyptian Governmental Universities from the second premium of the university fees for the current academic year.

The Minister assured that all universities and institutions announced high standby case as preparation for the final exams of the current academic year the will be conducted through the next June and ended at the beginning of July- the submitted reports by the universities’ heads indicated that taking all the precautionary measures by ensuring discipline and obligation, applying all precautionary measures to ensure the good performance of exams according to the internal regulations of faculties and institutions, and the safety of all elements of the education system at universities.

The Minister presented a summary about his recent visit to France during the period from 19th to 22nd of the current June, that witnessed the selection of the executive company of Beit Misr Project in Paris, singing an agreement between the Supreme Council of University Hospitals and the Public Administration of Paris Hospitals; and an interview with the French Minister of Higher Education and Scientific Research and Innovation has been held to support the cooperation between two sides, visiting Korean institute of oncology and searching the suggested cooperation ways with the institute, and meeting with the leaders of Jean Moulin University Lyon 3, France to agree on the future cooperation aspects.

Dr. Rasha Kamal -President of the Central Administration presented for the delegated students a presentation about the platform of studying in Egypt, as implementation to the presidential directives of unifying the acceptance authority of the delegated students and developing the system, the presentation showed the platform worked on achieving a broader international and regional spread towards Arabic countries, African Continent, Central Asia, and Eastern Europe in addition to raising the level of the digital transformation and representing the Egyptian Universities.